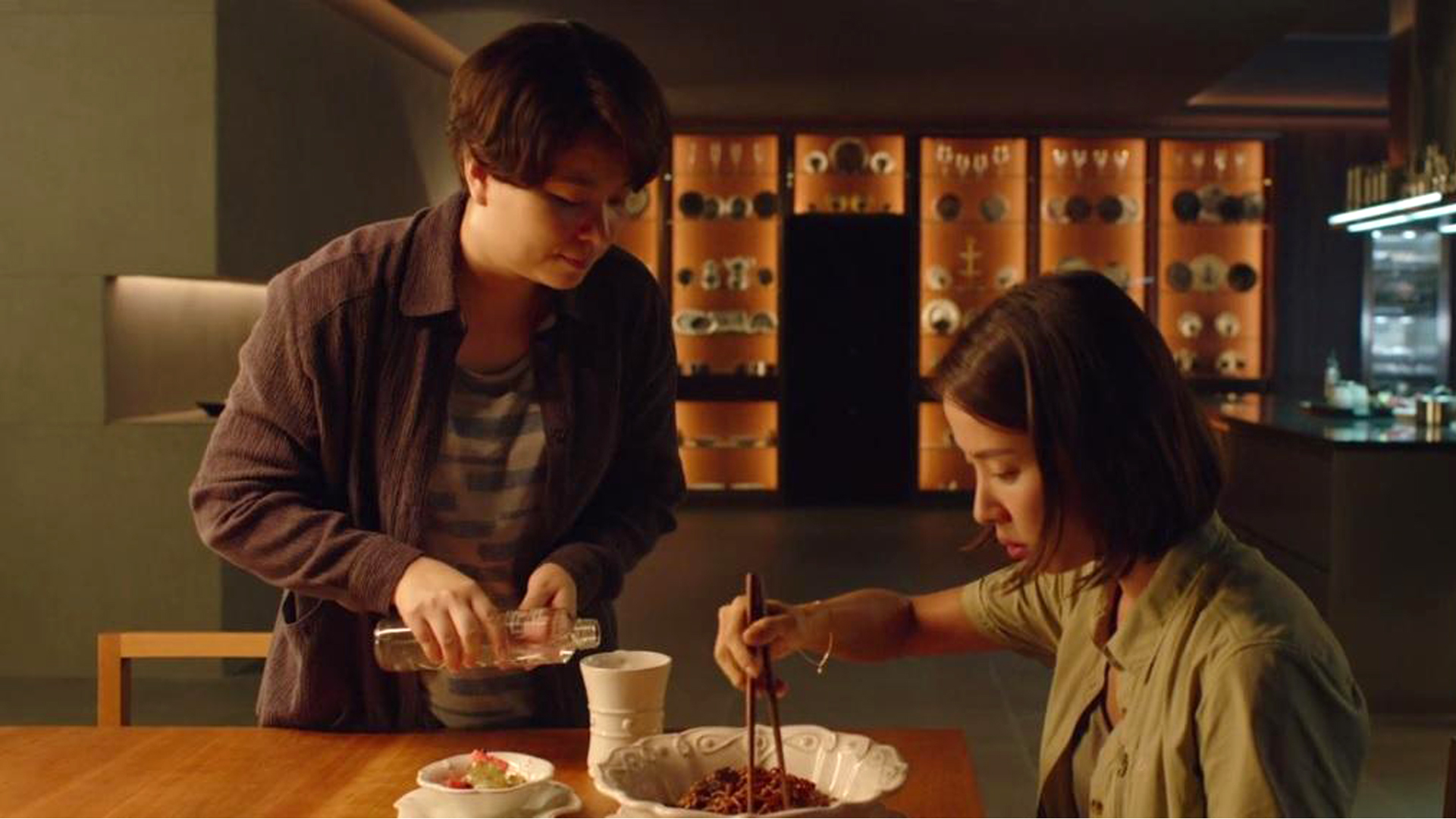 How to make Ram-don inspired by Parasite

By now you probably have heard of Bong Joon Ho’s movie, Parasite. If you haven’t seen the Oscar winning piece, you should get on it! It is truly a wonderful thrill of a story that touches upon avarice and discrimination of classes between two Korean clans, the wealthy Park family and the meager Kim family.

After seeing it within Toronto for the first time, I knew I had to go and watch it again. I’ve become somewhat hooked on the story that I’ve been telling everyone I know it is a must see film. I recently brought a friend of mine to Playhouse Cinema in Hamilton who has also been eager to watch it and once again, I fell in love. Not only did I fall in love with the great performances of the cast but also grew a strong particular craving after a scene.

Now Parasite has no shortage of metaphors within the film, and although we do come across some interesting food scenes. This one seems to have caught everyone’s attention, including me (of course). If you have seen Parasite already, then you recall the moment where we become introduced to Ram-don. Now I won’t get into the specifics and spoil the exact scene from the movie but we learn that simply, the Park family tries to glamorize an easy and cheap dish. As it seems apparent that it’s not sufficient enough on it’s own, they felt that it needed a upscale of luxurious Korean steak.

Ram-don or Jjapaguri isn’t particulary new but Boon Joon Ho’s movie, Parasite has gotten this cheap dish trending. Jjapaguri is a combination of two types of noodles consisting of Jjajangmyeon (Chapagetti) and Jjamppong (Neoguri Spicy Seafood Udon) without the broth but with all of the udon flavor in a yummy chewy consistency. 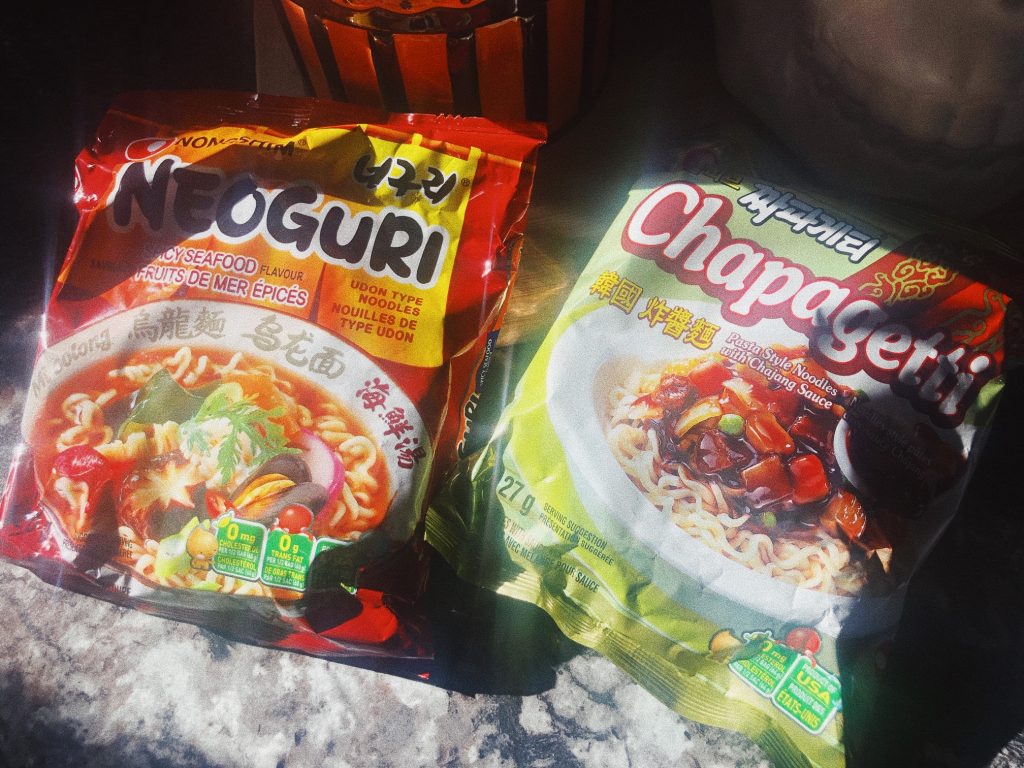 After watching the film I began an interest in re-creating this dish. I mean, I’m a broke college student on a budget. So if I’m able to make this dish, then trust me, it’s possible for anyone! Well with the exception of the luxurious steak. I can’t afford that. Now overall, I thought these noodles were good, but I personally am a fan of putting kimchi, eggs, cheese, and spam in my comfort food. (You know that struggle life but with mass amounts of dairy that’s borderline unhealthy.) Below I’ll show you my rendition of Parasite’s easy Ram-don dish. 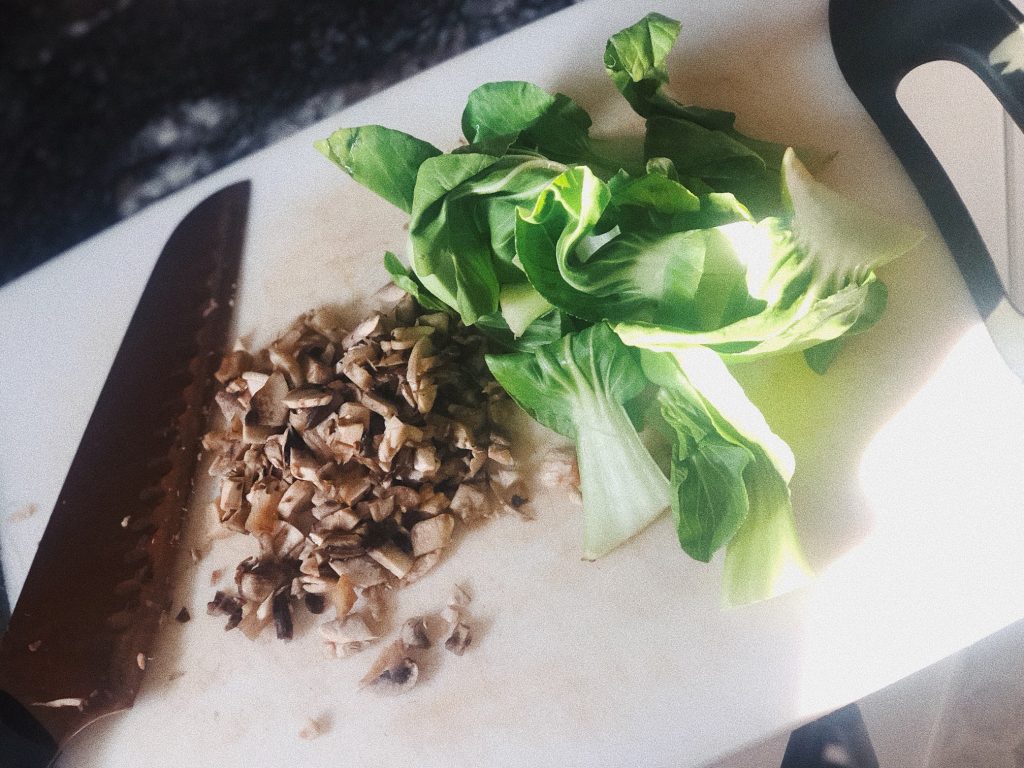 Before we begin cooking, I always like to try to slice my meat and vegetables prior. So I ended up cutting my beef into thin slices and seasoned with black pepper and salt the other day. So for today all I had to do was mince the mushrooms and I had cut my baby bok choy in half just to make it easier to consume.

Boil water into a pot that will fit about two packets of noodles. As we wait for the pot of water to boil, I also heat up a pan with a little bit of oil and cook my beef on medium heat for a couple minutes until cooked as desired. I prefer medium rare. Set aside. 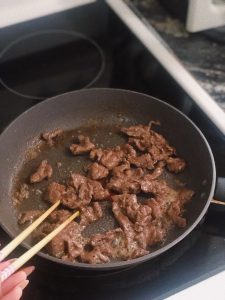 Place the minced mushrooms in the pan with a bit of oil or butter and let them cook down. Don’t forget to mix them around once in a while.

As these are cooking, the pot should be boiling by now. Grab the Chapagetti noodles and Neoguri noodles and place them into the pot to cook for a few minutes. Set aside the dried spice packets as we will add in those later. 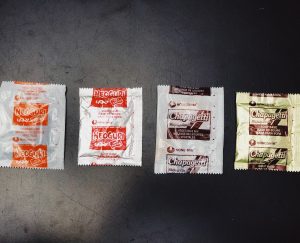 Add the baby bok choy to the pan to cook with the mushrooms. Once those are cooked, you can also set aside. 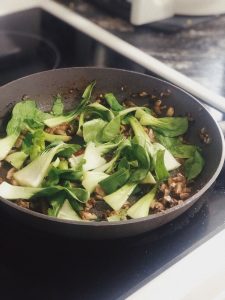 After cooking the noodles for a few minutes, drain away about half of the water from the pot, leaving enough water to slightly cover the noodles. Return the pot to the stove and continue cooking on low-heat to medium and simmer. Add in the both the dry and sauce packets from the noodles into the pot. You can use 1/2 of the Neoguri seasoning packet if you want less heat. I used it all and slightly added chili powder on top. 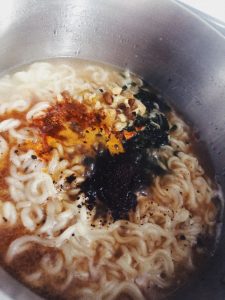 Continuously mix the noodles to make sure they are well coated. The sauce will look watery but will soon thicken so make sure you keep mixing so it doesn’t burn the bottom of the pot. 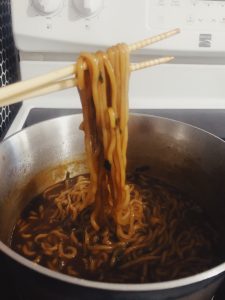 Once most of the liquid has gone down and the sauce has thickened, add in the cooked beef and vegetables. Mix well together and transfer it into a bowl for consumption. 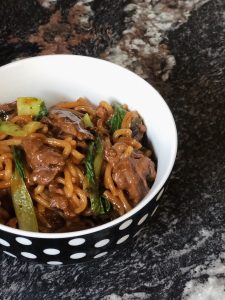 Basically that’s it, a super cheap and easy dish to enjoy in the comfort of your home, whenever you feel lazy!

I hope you guys enjoy my version on Ram-don inspired by Parasite. I personally feel like I have to watch Anime every single time I eat noodles, so I’ll be watching My Hero Academia next time I cook up my favorite comfort food with some soju. But again, if you have not seen Parasite, you are missing out! Get on it! Check out Playhouse Cinema or Westdale Theatre for show times in Hamilton.

With the rise in popularity of the keto diet, many students in our Davis campus have been looking for keto smoothies in Brampton. The keto diet allows you to eat as much fatty food as you want, as long as you limit carb intake. Smooth Operators offers a huge variety of keto ingredients, for infinite smoothie flavor combos.